Does anyone like cleaning the bathroom? We all know that doing a little each day makes the chore easier especially if there is a quick and easy way to do it. Disinfectant wipes are convenient, easy to use, but expensive. Naturally, DIY wipes are the way to go

I searched the Internet for what others were doing for homemade wipes. I found a lot of formulas. The assorted ingredients included vinegar, coconut oil, a multitude of essential oils, and pine cleaner.

Many years ago, in a Microbiology class in college, we tested some common household items for their germ-killing capabilities. A petri dish was prepared with three different bacteria. (I don’t remember what they were.) We all brought in different things to try. My lab partner brought Woolite. I brought pine cleaner. Two out the three areas on her dish were clear of bacteria after applying her Woolite. My pine cleaner killed NONE of the bacteria. So, it may not come as any surprise that I don’t use pine cleaner.

Knowing what I do about pine cleaner, I skipped any formulas that called for it. I wanted a disinfecting wipe and I have scientific evidence that this stuff wouldn’t disinfect its way out of a paper bag. 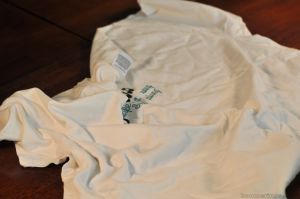 The cloth to use for the wipes is a no-brainer. I’ve got several old T-shirts with stains that nothing on the planet will remove. They remain in the drawer until I make cleaning rags out of them. It was time to press one of those shirts into service.

So, in my search for a recipe, I landed on the Living on a Dime site. Unlike many of the other recipes, this one includes alcohol. It’s one thing that we know will disinfect; the jury is still out on many of the others. 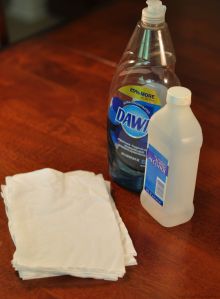 Mix the ingredients together. Pour over rags until sufficiently dampened.

View all posts by Twain Fare