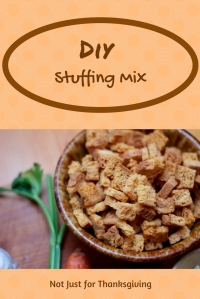 My favorite part of Thanksgiving dinner is the stuffing. Maybe the pumpkin pie, too but mostly the stuffing. The meal is simply incomplete without it. I make a big batch every year and there’s always plenty of leftovers. This is one time I don’t worry about it because not a crumb will go to waste.

Bread stuffing is just too good to only have once a year. There are alternatives to homemade but packaged stuffing mixes are just short of awful, in my never humble opinion. They are loaded with salt and little else. In their defense, they are convenient.

A weeknight dinner doesn’t lend itself to lots of time-consuming cooking in most households. Even in my retirement, when time is not at such a premium, I don’t want to spend a lot of time on dinner. There are simply too many other things to do. That doesn’t mean I don’t want good food. It’s why I love this mix. It takes a couple hours to make but most of that time is waiting for the bread to dry in the oven.

I use the French or Italian bread I find on the clearance racks at the store. It’s usually half the price of a fresh loaf and perfectly good for this mix. Cubing the bread is a little tedious, but worth the effort.

This recipe comes from the book Make-A-Mix by Karine Eliason, Nevada Harward, & Madeline Westover. If you like DIY mixes, it’s worth the effort to find a copy. I have to admit that mixes fascinate me and I’ve written about them before:

The original recipe calls for adding dried onions to the mix. I made them optional in my version because, if I make it for stuffing a chicken or a side dish, I want to add fresh onions to it. If I use it as part of a recipe, then it’s easy to add a bit of dry onion.

The following is straight from the Make-A-Mix book. I’m sure you would only need half of this recipe to stuff a chicken.

In a large bowl, moisten stuffing mix with liquid.
Melt butter in a medium skillet. Saute onion and celery until tender. Combine with stuffing mix and toss lightly.
Mixture can be baked in a lightly buttered casserole for 30 minutes at 350 degrees.

View all posts by Sue

1 thought on “DIY Stuffing Mix: Not Just for Thanksgiving”